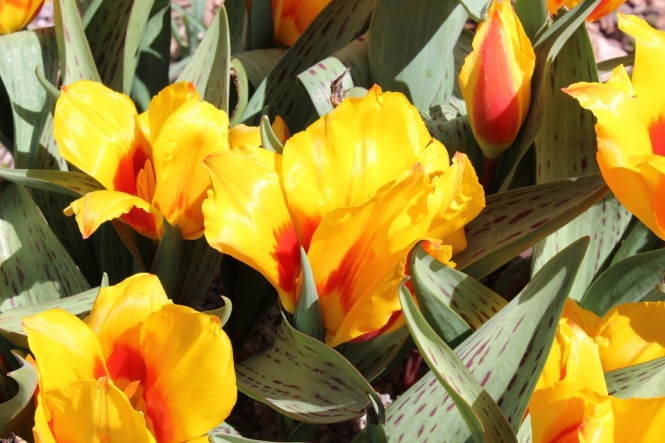 As promised yesterday here is the first instalment of my story, although I believe a few of you had doubts it would come to fruition.  Perhaps that was just me.  Anyway, if you are all sitting comfortably I will begin.

Wednesday began quite normally.  For me anyway.  Digging and weeding and planting and the like. The afternoon however was quite different.  Making my excuses to Max and his Dads I rushed home, pulled a twig through my hair, put on my second best smock and headed off.

What followed was a rattling drive down the Link Road and onto the motorway on what appeared to be the occasion of the annual outing of the Bloomin’ Enormous Lorry Club.  It was a glorious afternoon and although the “mended” jammed heater was giving me a healthy glow bordering on imminent spontaneous combustion, a good supply of giant jelly beans kept me going.  I was headed to see my friends, The Farmer’s Wife and her hubby, at Little Ash Garden, not far from Honiton in East Devon.

Strangely, this was not ostensibly a horticultural visit, although unsurprisingly, as you will discover tomorrow, there was some garden fun involved.  The truth was that I had come all this way to watch The Farmer undertaking his part time hobby.  This unusual past time involves sequins, feathers and making a lot of noise.   You’ve guessed it, he is in a Samba band!  Not dancing you must understand, but a vibrant band of percussionists who perform all over the country bringing a little sunshine to our often dull world.  The Farmer himself plays a drum, although we must not call it a drum but a surdo.  I am writing about them for Devon Life and had been looking forward to seeing the band in action.   And I was not disappointed.  As I arrived I was handed ear plugs and wondered at first if they thought I was a bit of a sensitive soul.  Then they began and I was pleased for the protection they afforded. What followed was two full hours of unremitting enthusiasm and energy. Forty or more people played a variety of exotic sounding instruments, often while moving to the beat and always whilst having a whale of a time.  As was I.  Well the last two anyway.  Shame I had to join in at the end and spoil it all!

Then it was off to the pub, for further “research” and to subject them to my scorching interview technique.   Dragged out by the Farmer we drove back to the farm arriving shortly before I turned into a pumpkin.   Here I enjoyed a deep sleep broken only by dreams of full of rhythm and colour.

4 thoughts on “Spill the Beans – Part One”