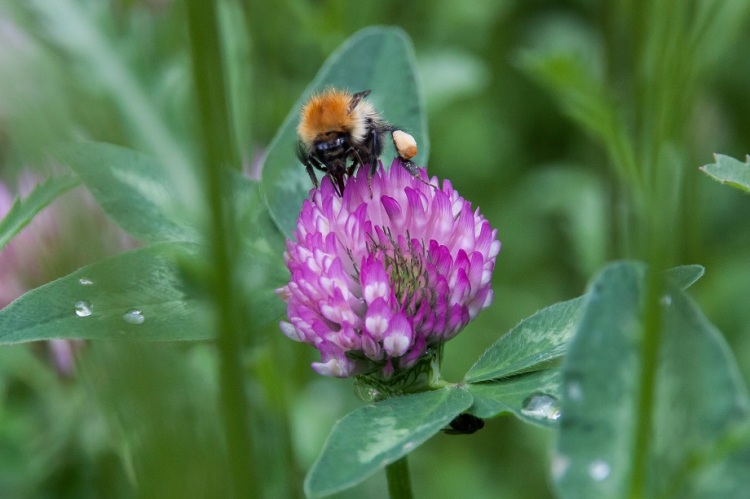 Mr Bun has been on a mission.  It has been rather scary at times.  Perhaps the first words he ever said to me were “do you know about meadows?”.  Um, a little, definitely not enough for your purposes.

This has not deterred him.  A gentleman who is in his second prime of life, who has recently climbed far enough up Everest (yes that gurt big mountain) to put the rest of us mere mortals to shame, is not going to let much phase him.  So he has been a’meadow making.  He has researched, questioned, prepared, stared at earth, doubted a little and is now semi-rejoicing.

This week the difference in his patch is phenomenal.  And it is a patch.  No more than 3m x 2m. We stood and admired it’s good behaviour before setting off to work.  Myself and Mrs Bun tended borders and beds, planting, weeding and chatting, the usual. Bees were supping and a gentle hum of insect pervaded even though the day was murky.

Just before home time, Mr Bun appeared with a list of the wildflowers he had sown and we trekked down the garden to do some tentative identification.  I spotted bird’s foot trefoil. Several times.  Different versions, obviously.  There was citrus sorrel and common knapweed and purple vetch and ox-eye daisies and a selection of grasses that begged closer inspection.  However, what was almost shocking was the preponderance of insect life.  The main garden was apparently merely a waiting room for the main party.  I reached for my camera and in the excitement pushed all the buttons in one go.  Inadvertently I set it to Night Mode.  I didn’t even know there was such a thing.  This means there were no photos.  A lesson learnt.  Perhaps.

Mr Bun is also an accomplished photographer.  Yes, he is very annoying.  This is one of his wonderful pictures which he has kindly loaned me.  I have to give it back later.

Here we have a bee (perhaps a tree bumblebee Bombus hypnorum) dining on red clover nectar, Trifolium pratense.  But it was not just bees, all kinds of flying folk were here, wasps and hover flies and the like.   Who knows what lay beneath the sward?! The rest of the garden paled into invertebrate insignificance.  And all in an area 3m x 2m.  Each and everyone of these creatures will benefit not only this garden but those around it by helping to maintain an ecological balance.

Really there is no excuse.

Well done Mr Bun.  What next?