I’m not much of a joiner-in.  Its not that I don’t want to, but I lack focus and commitment. However I have decided to have a go at The Propagator’s meme, Six on Saturday.  For those of you who don’t know The Propagator he is best described as The Terminator in reverse.  His remit is simple: post six photos of plants from your garden on a Saturday.  That can’t be too arduous can it?  Apart from the small fact that most of my pictures are taken in my esteemed client’s gardens and I never work at the weekend.  Um.  Could be tricky.

I have asked Mine Host if I can use photos from other places and he most kindly agreed.  I haven’t mentioned the “not taken on a Saturday” bit yet as I don’t want to push my luck.  I will promise to stick to six if that helps.

So in an uncharacteristic willingness to conform, I have on this occasion battled through the chaos and managed to find the magic six in my own garden.  As I have mentioned before my own garden is full of good intentions and neglect.  This was therefore not an easy task.  But I was brave.

The opening photo is Scabiosa drakenbergenis, which is a cutting from a plant at Cliffe.  That plant was grown from seed.  It is loyal and undemanding, winding its way through and around others in the border, popping its head up in unexpected but welcome places.  It comes from the Drakenberg Mountains in South Africa, reaches 1m tall and is tough and beautiful, a perfect combination. 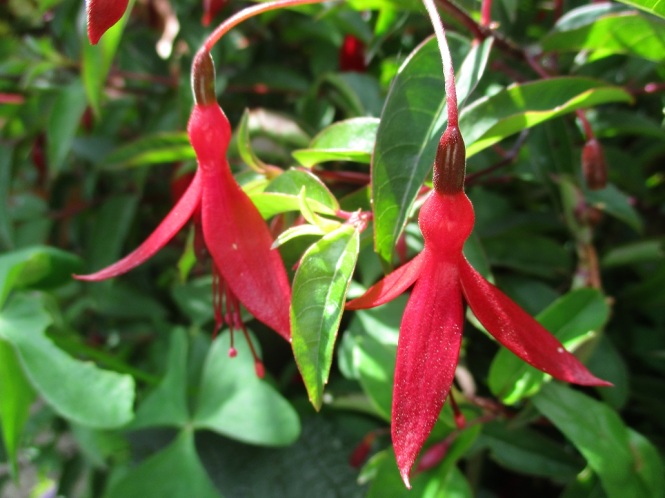 Next comes Fuchsia hatschbachii.  This fuchsia came into my possession whilst on a trip with Torrington Tina.  That is all you need to know, except no criminal activities were involved.  None that might result in a prison sentence anyway.  I like to think we liberated it.  Compact in form, dark green foliage, masses of slim red and mauve flowers.  No wonder both myself and TT had independently admired it from afar.  Sometimes you do get what you wish for. 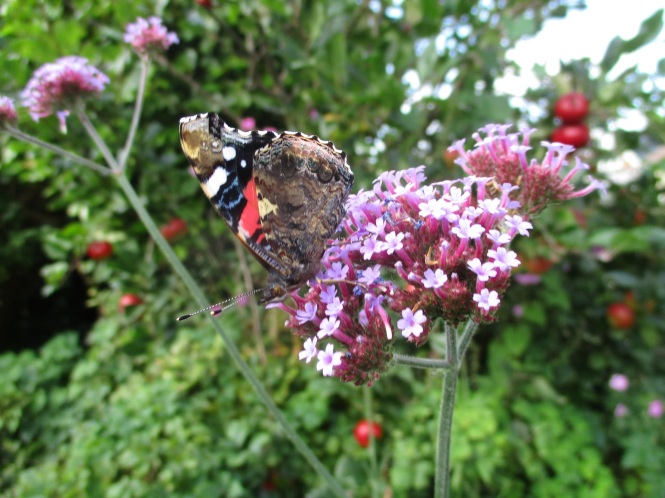 Now for the ubiquitous Verbena bonariensis.  Self-seeder and butterfly magnet extraordinaire, it was doing its job well this morning.  This little chap was hanging on for dear life as the stems almost doubled in the brisk breeze.  Others might have called it a raging wind.  Hopefully his persistence paid off. 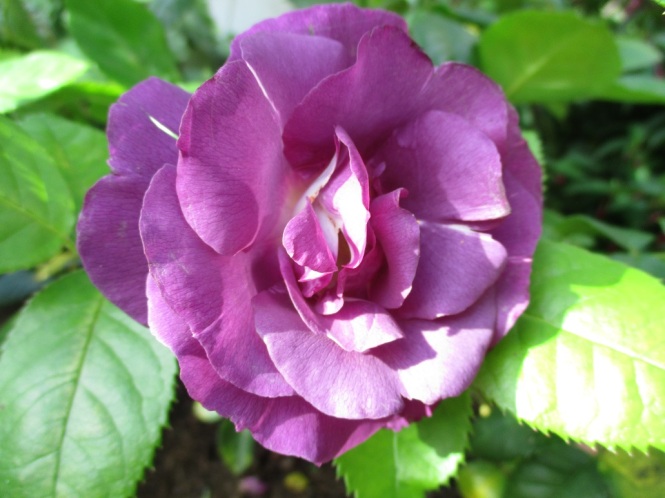 Oh yes, the rose.  The Rosa ‘Rhapsody in Blue’ that I bought earlier this year from Cannington Walled Garden has just begun its second flush of flowers.  The scent is delicious, the flowers a treat. It is doing very well in its pot, has avoided any blackspot and is growing just a little too vigorously!

We must have a dahlia.  This is one that I grew from seed and is purported to be Dahlia australis.  I have an inkling there may have been some shenanigans with an interloper.  Although this has the slightly nodding habit of the species, it is supposed to be single flowered.  Oh well, you win some you lose some, and it is very pretty.  It shall be known as Dahlia australis-ish, which is quite hard to say after a couple of babychams (or equivalent).

And lastly the magnificent teasel.  These self seed in the front garden and are direct descendants of The Giant One.   TGO lived in our garden in Bristol and hitchhiked a lift on one of plants we brought with us.  For the past 10 years they have appeared without fail, to the great joy of local bees and finches.  When the winds come from the North, they dance a merry dance.

So there we have it, Six on Saturday.  Thank you Mr P for hosting this meme.  I hope I have passed the test.

19 thoughts on “Six on Saturday”

One Man And His Garden Trowel