It’s raining it’s pouring, I’m not going outside again after getting soaked walking miles to pick up my camera that I stupidly left in Max’s Dads’ car yesterday after a wonderful day out and had no transport because OH had taken the car to do the shopping and anyway I had jobs to do in the High Street.  Not quite as catchy as the original, but I’m working on it.   So, fearing the wrath of The Propagator, who owns Six on Saturday, I have had to be inventive.  Necessity and all that.  Warning:  Some connections to my garden may be a little tenuous.

First, snowdrops in the sunshine.  It would be impossible to pass this sunny shot off as today’s photo.  In fact this picture was taken yesterday at Little Ash Garden where myself, OH and Max’s Dads met up with Rusty Duck and Torrington Tina to marvel at Helen’s masterpiece of a garden.  Although billed as a Snowdrop Day there were many other delights; hellebores, winter flowering honeysuckle, clematis, flowering quince, cake and coffee, and three varieties of homemade soup!  Two pots of snowdrops came home with me, ‘Magnet’ and ‘S. Arnot’.  They looked lonely.  They are now taking their chances in the deluge.   Where I refuse to go to take a photo.  So there.

Next we have my pride and joy, a brand new shiny labeller.  Don’t stand still for too long, or you will have a piece of tape across your forehead.

Now a picture that was taken last week, but I imagine it is looking pretty much the same.  Perhaps a little damper.  These slightly nibbled shoots belong to an emerging Fritillaria persica, the Darth Vader of the fritillery family.  I bought this gargantuan bulb couple of years ago at Malven and it has yet to flower.   Fingers crossed for this year.  As the more observant of you might notice, yes you Mr K, there are some “kind to everything except slugs and snails” pellets scattered around.  It might be “closing the door after the mollusc has bolted”, but I thought it was a little early to worry about that kind of thing.  However, it has been an extremely wet and mild winter, up until this last week that is.  Perfect conditions, if you happen to be slimy.

Some positive news, germination of more seed.  These triumphs include Alonsoa warscewiczii, Malope trifida and Salvia viscosa.  All of these I have grown before, although not for a while, and I am looking forward to getting to know them again. 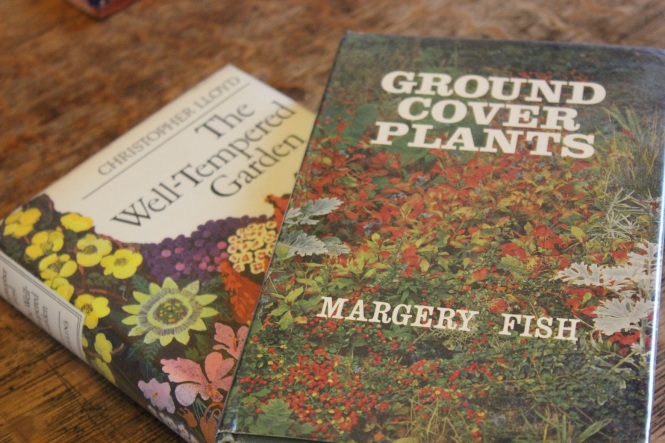 A note in a Christmas card read “We have a couple of first edition garden books, would you like them?”.  This enquiry was from an ex-boyfriend’s parents, a wonderful couple whose company I always enjoyed and have remained friends with for the last 30 years.  It was at their soon to be permanent home in the South of France that I first read a gardening book.  Long before I gardened.  When the very thought would have provoked howls of laughter.  The book was Christopher Lloyd, The Well Tempered Garden.  A fine introduction to garden writing.

Lastly we have houmous.  As I couldn’t go outside I made some.  An essay I wrote in college came back with the comment “interesting, but perhaps a good humus content in the soil would be more beneficial than one rich in a chick pea dip”.

Thanks again Mr P. Pop over to his blog to read other contributions, most likely written by braver and less sensitive souls.  Here’s hoping that next week will be just a tad drier …..

34 thoughts on “Six on Saturday – Necessity”