Some days toddle along, nothing particularly notable happens, nothing even close to news worthy occurs.  Most days actually.  Don’t get me wrong, no complaints here.  I am quite happy with my meandering life.  When I get home and recount my days in minutae my OH often nods off “was that one of Gill’s interesting stories?” he asks when he wakes.

Brace yourselves folks, there is one coming up.

The day began well.  A bacon buttie well.  Yes that good.  It was warm and welcome on my arrival at The Bun’s.  Mr B took one look and sighed one of his sighs.  I think it meant “you deserve that sandwich, take your time and enjoy it”.  Not absolutely certain though.

And the day progressed well.  Mrs B harvested some cucumbers from medusa’s nest, once known as a greenhouse (I had to pull her out twice by her feet) and bravely retrieved a few good ‘uns.  She kindly gifted me a brace which I placed on the grass by my tools.  It soon became apparent that someone else had designs on them. 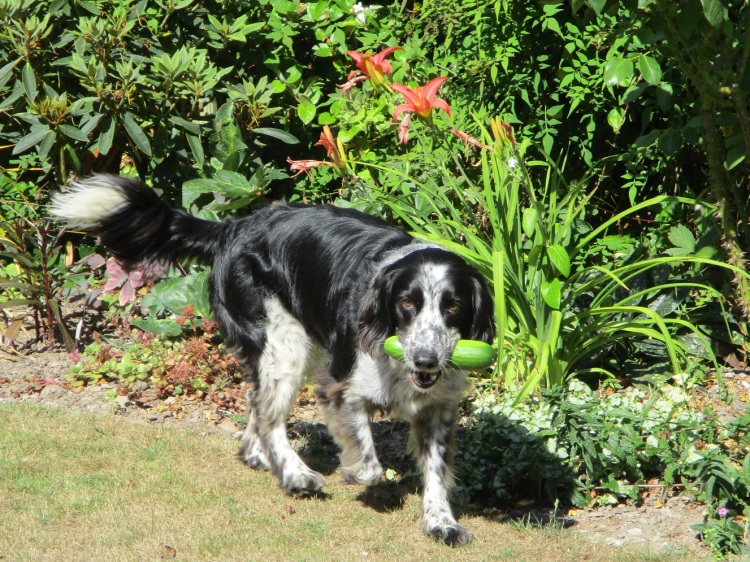 Bobbie, who I had previously considered a friend and ally, ran off with one of them.  Mr B tried to fob me off with “she is looking after it for you until you leave” although I wasn’t completely convinced.  The slobber might have added a certain je ne sais quoi, but I decide to give it a miss.

Next I had a rendevous in the lovely village of Mortehoe, meeting on the lychgate steps outside the church.  A friend, who has yet to be named but on reflection I think Dahlia Dora will do the job nicely, is on holiday for the week.  Her family were on the beach and we had a couple of hours pencilled in for catching up.  As I was a little early I took the opportunity to wander the graveyard, examining the headstones, reading names and ages and years.   Although the village was busy I was alone in my contemplation of those that lay below.

Then coffee and scones and cheese and much gossip and laughter.  And even plants to admire.  Another day with nothing to report.  And I am very happy for that.

21 thoughts on “An Interesting Story”