After a week or more away, I have come home to builders, scaffolding, inaccessible plants and a really vicious cold.  For this reason (and I will continue to blame everything on the builders including my poor health, who in reality are rather nice chaps, until further notice) my Six on Saturday will dwell on holiday snaps.  Of course these consist, on the whole, pictures of plants.  This is probably just as well you wouldn’t want to see myself and OH in our “kiss me quick” hats, trousers rolled up daringly above the ankle, having a paddle.  If you would like to share in the experience of other SOSers, with or without builder input, pop on over to our Site Foreman to find out more.

First we have an osteospermum, growing in the recess of a wall overlooking St Ives.  Always a joy to visit, come torrential monsoon and high winds or shine. 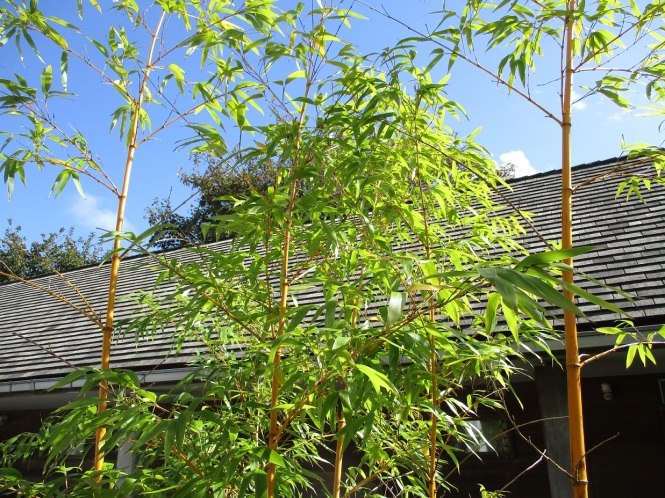 Next is a golden bamboo, possibly Phyllostachys aurea, but I’m not absolutely sure as I wandered off to admire it and I was reined back in.  Which happens unsurprisingly often. This photo was taken at The Leach Pottery, also in St Ives.  It is located about 100m from my childhood home and we always visit when we are down.  Incredible pots and wonderful memories.  Not that we were aware of it as kids, we were just kids.  In those days we were just interested in playing on the beach/woods/moors and eating Mr Kipling’s produce.  And yes we did buy more pots.  Very beautiful they are too. 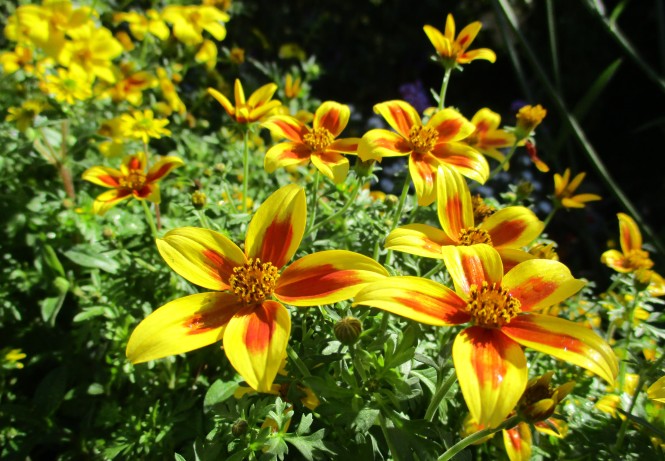 Then on to Penzance to catch up with old friends and continue our hedonistic adventures.  Our guest house had a rather amazing garden, which not only had sea views but was packed with colour.  These bidens were a treat, as was the Hummingbird Hawk Moth feasting on the Verbena bonariensis, which unfortunately avoided my lens.  You will have to trust me on that one.  On our last morning we were waiting for our taxi to take us to the train station, when a gentleman in a rather flamboyant shirt left the house.   He started a conversation, asking us where we going and the like.  He then dropped into the conversation, like a feather into a vat of oil, that he was returning from Kew Gardens to Tresco where he is the curator of Abbey Gardens.   I may have fainted.

During our stay we visited the small-but-perfectly-formed Penlee Art Gallery and Museum, which is situated in Penlee Gardens.  I almost didn’t get in the door.  Waylaid variously by swathes of Tulbaghia violacea, a largeTrochodendron aralioides full of Sputnik fruit, white crinum and night scented Cestrum parqui.  The treasure which made me squeal with glee was this Colquhounia coccinea, unlike my own specimen, a strong and flower-full example.  When I got home I rushed to see if a miracle had happened.  No. 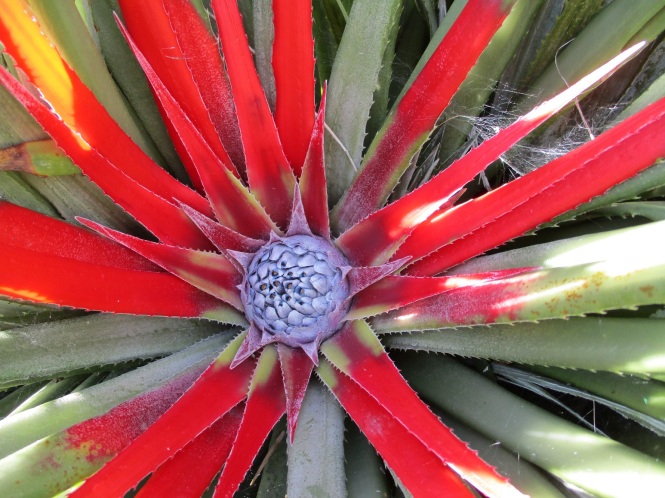 I had a hunch when I saw the expanses of swordfish foliage that it might be something special.  A little poke about and I found what I was looking for, the outlandish flower head of Fascicularia bicolor .   Planted in a tiny garden, come seating area, just opposite the Jubilee Pool, this is another example of the exotic as ordinary.  Wonderful.

On our last day we had an itinerary.  We were having a day out with my good friend and jeweller to the stars (and me) Duibhne Gough, known to her pals as Div.  She would take us to The National Dahlia Collection, then lunch, then to a nursery, then to see her new workshop before home, tired but happy.  I have long wished to visit the dahlias at Varfell Farm, even more so since I named a dahlia after my Mum, read all about it here It Is All In The Name.  It was a fabulously sunny day with bloom after bloom after beautiful bloom.  But none were the special one.  Soon I was beginning to doubt myself and that it was in fact a cruel hoax.  Then a point and smile from the lovely Div and there she was in all her glory.  I can quite honestly say, in a totally biased manner, that Peggy Pearlers was the most beautiful specimen in the field.

After a delicious lunch our itinerary was scrapped, as £20 worth of unleaded had found its way into the diesel Citroen.  It turned out for the best, a balmy afternoon of laughter and lager (and the odd house white but that didn’t scan as well), and I didn’t buy a single plant!

Thank Mr P for being the host with the most.  Until next time!