Of course it was too good to be true.  Last week was the intruder, the uninvited guest who agitated the party, whipping up the mob, charming us into believing we could have better.  But we can’t.  This is the south-west of the UK.  It rains.  It blows.  We have residual webbed feet.   I should have known better than to raise my hopes.  But I did.  Now everything is back to type and I feel disappointed.  Which is why I am here, far too early for a Saturday morning, on the set of Carry on Screaming.  The wind outside is making ridiculously clichéd sound effects, sleep is impossible.

But let us not descend into melancholia, this blip is nothing that a bit of Six on Saturday can’t sort out.  This cure-all is distributed by Dr Prop, medicine man and snake oil supplier to the stars.  If you dare, pop over and see what it’s all about.

To begin we have apple blossom, of which there is an embarrassment this year.  Or should I say was?  I am wondering how much will remain after these gales.   Still, we rarely eat the fruit these tiny twisted trees produce.  The jackdaws will be remiss, they love their autumn apples. 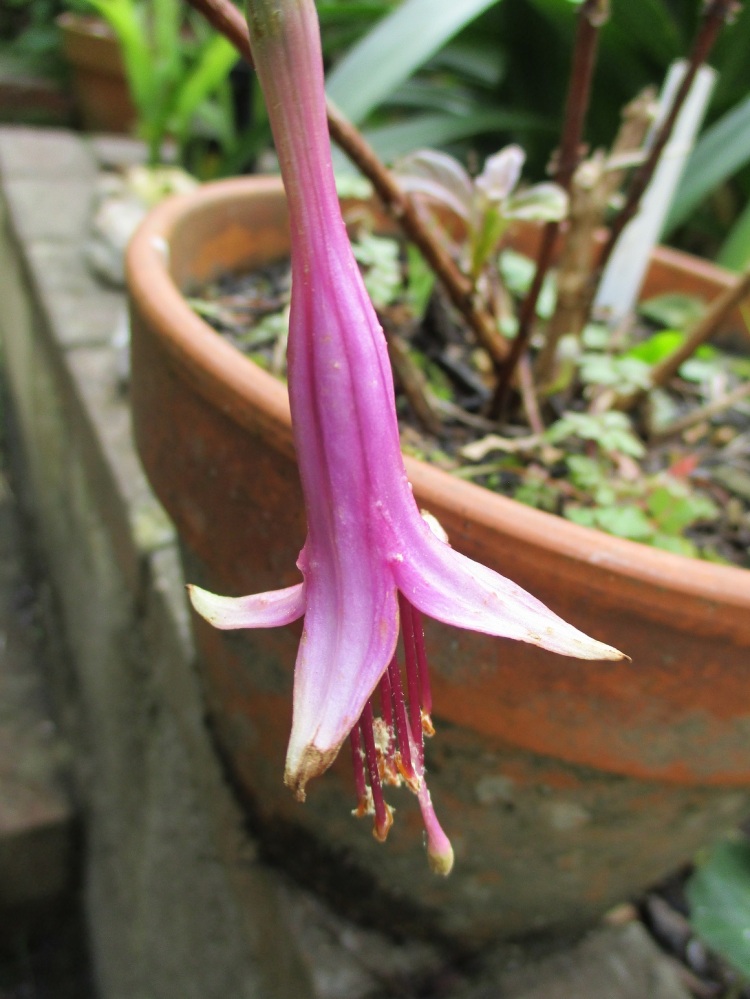 Next we have a surprise, to me anyway.  As the label had been stolen by the fairies/broken/never existed I was under the illusion that in this pot lurked a bizarre root vegetable I had bought from Lidl a couple of years ago.  Apparently not.  I believe I can say without contradiction that it is a fuchsia.  Then it all came flooding back.  It is Fuchsia jantasensis and it has been languishing for a few years not doing anything of merit, definitely not flowering.   I can quite honestly say that it was not worth the wait.  Apparently it is quite variable in form.  Not sure this is its best incarnation.  The pollen looks like broken biscuits which is rather sad. 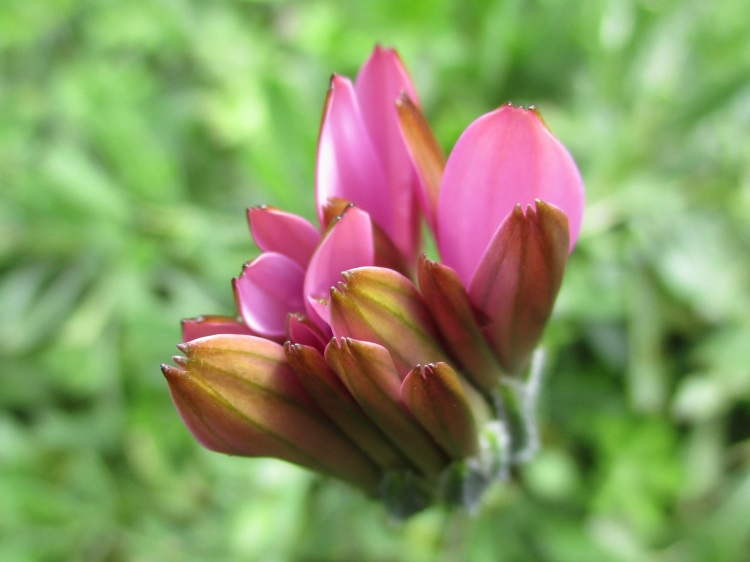 Now for a something with a little more potential. Osteospermum ‘JK’ is just about to come into flower.  Dependable, weed smothering, bright and beautiful.  Sound like anyone we know?

What now?  Oh yes, strawberry flowers.  Shall we take a moment?  I think we need it.  Imagine a sun-warmed plump strawberry, plucked straight from the plant in all its virgin glory, at best wiped on the leg of your shorts to remove any slug slime, sweet and fragrant.  Better have another one.   Fabulous.  That feels much better.

The photo is a bit blurry because it was raining when I took the photo, and the wind had already begun its torment.  The things I do for you! 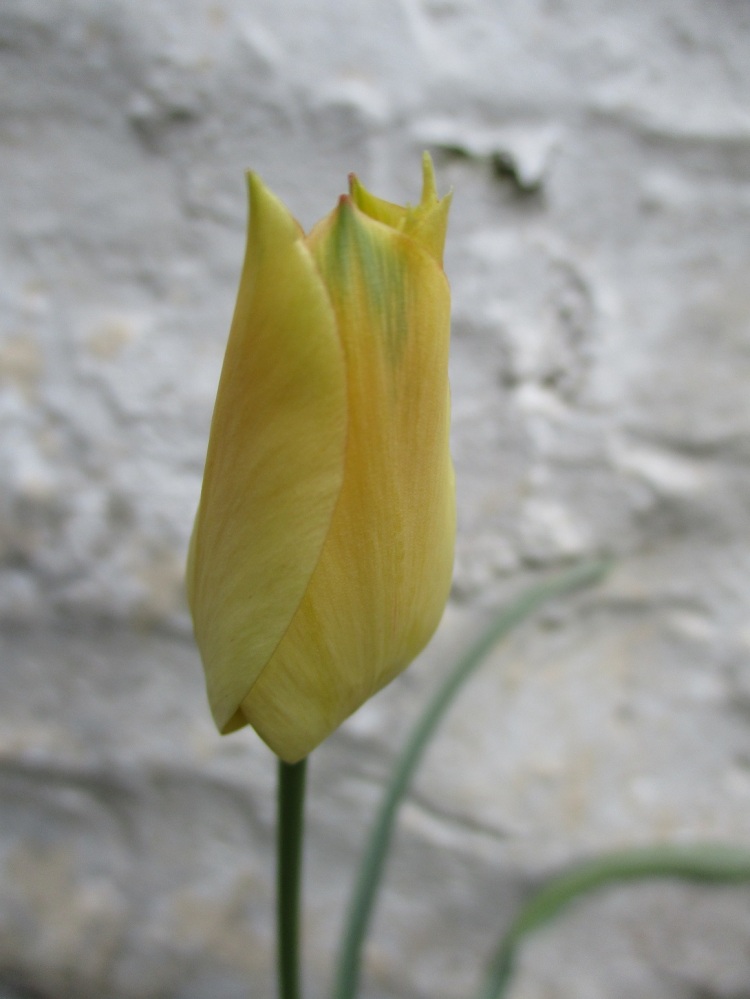 This little tulip, Tulipa batalinii, was bought at Marwood Hill Gardens a couple of weeks ago.  One pot for me, one pot for my friend.  For some reason we thought they would be bright red, possibly because this is what we wanted and somehow by wanting them to be that colour it would materialise.  Wrong again.  This flower has been wide open and has now quite sensibly decided that the better part of valour is discretion.    It is rather pretty, with its green tinged edge.  But definitely not red. 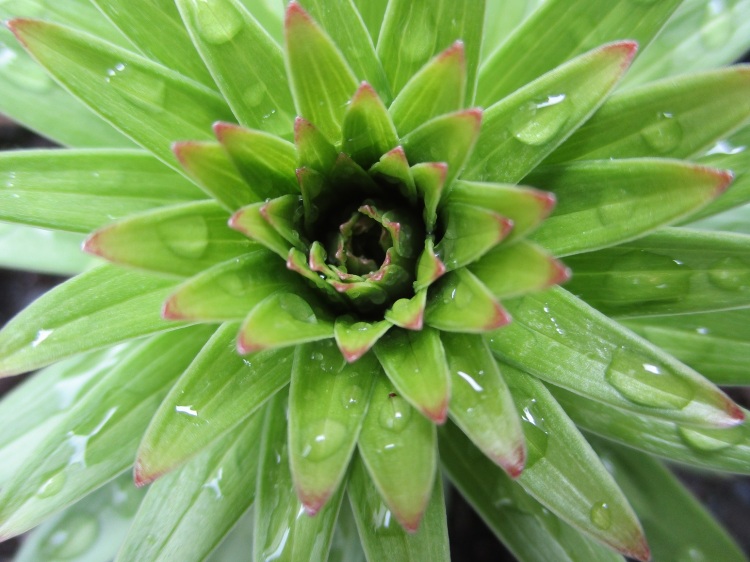 A few years ago I saw a truly gob smackingly amazing lily on the television which went straight to the top of the Lust List, Lilium ‘Forever Susan’.   Deepest mahogany petals, the tips of which are orange, as if someone has held onto the ends as each were individually dipped.   When I spotted a pack in a garden centre I was very excited.  When I came to plant them I realised that they were Forever Linda and not Forever Susan.  Close, but not close enough.  Nice, but not nice enough.  I mustn’t muddy my love.

There we have it, another week completed.  Stay safe.  Remember the strawberries.

38 thoughts on “Six on Saturday – Stormzy and Soggzy”