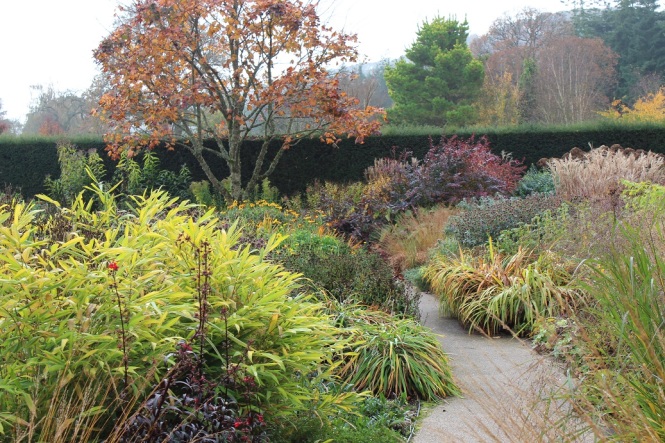 “Oh yes”, I bragged, “we will be there at 10.00, forming an orderly queue or hammering on the door dependent on how much coffee I have drunk”.  So confident was I that we would be early than an illicit meeting had been arranged with Rusty Duck in the car park for the furtive exchange of “goods”.  You don’t need to know any more.  Anyway, as so often follows an outbreak of cocky-istis, our prompt arrival was scuppered due to some serious over-sleeping (me) and roadworks (North Devon). Hero had arrived on her motorcycle combination promptly but had to be entertained by Mr OTE (many would call it interrogation) until I ran down the stairs and straight out the front door. Changing from your onesie bunnie PJ’s into your special garden visiting outfit in a sidecar is a tricky undertaking, I can tell you.  Anyway, in the end we were only a little late, we completed our “business” with the Rusties and headed to the restaurant for our rendezvous with rest of the All Horts crew.   There they were, the Dream Team – organiser extraordinaire SDG, the Farmer’s Wife and Hartland Harry (wot no trousers) of course Hero, Mr and Mrs Rusty and myself.  With late arrivals of the out-of-countyers, who apparently had to contend with long queues at passport control so can be forgiven, Mad Cat, Didcot Dave and the Taunton Gardener.  After necking one of the best cheese scones I have ever had (and I have had a lot of cheese scones) and a large black coffee I was ready for adventure.

A detailed itinerary was devised (look around garden, eat, look around garden some more, shop, eat) and we were off.  November did its best for us and we wandered around in t-shirts and even in some very optimistic cases (or someone in training for a Christmas job with the Post Office) shorts.  The gods were smiling on us.  So much to recount, I will make it a snappy.  We saw the winter garden, with beautiful abutilon and liquidambar, the allotments with outrageously perfect salad rows, a hobbit house with hobbit cat, the still steaming Hot Garden and curiously abandoned pumpkin, the technicolour lake, the shining apple arch of the vegetable garden where gourds hang ominously.  Through the tunnel to Lady Anne’s garden, past Land of the Giant gunnera and bamboos, metallic grey monkshood, striking blue of decaisnea seed pods, the forbidding stare of the dolls eye cimifuga, impatiens, salvias and cannas.  Really it was all too much to compute or even recount.  Sustenance was needed.

Lunch was taken al fresco, and was without complaint until a slightly dodgy moment when Didcot Dave’s pud was a little tardy in arriving.  I swear I could detect a slight green tinge coming to his forehead.  Then, with renewed vigour and full bellies, we were off again to wander around the potager and rose gardens for more wonder and inspiration.  Scented pelargoniums tumbled with heliotrope and pink verbena, scarlet rose hips and terracotta nasturtiums.  Fennel and thyme, curving drystone walls softened with helianthemum and erigeron.   Informal, relaxed and useful, a good place to end our tour.

Then something wonderful happened.  There had been whispers but could it really be true?  It was!  There was a sale on at the Plant Centre!  Can my beating heart take much more?  The Farmer’s Wife, no messing about, went straight for the trolley.  And the dash began.   I bagged an astelia, Digitalis parviflora, something beginning with z that I had never heard of before but that TFW knew (swotty pants) and a well won Diascia rigescens that I had been admiring a little earlier (thanks DD).  I could have lingered longer, but when I got caught by a member of staff searching for scything pictures in the Poldark book I made a hasty, rather reddened exit.

Then coffee, cake, a final chat and then adieu’s until the next time.  Rusty had injured her ankle earlier in the week, whilst undertaking an extremely complicated move in the Argentina tango, but very bravely managed to hobble about for the whole day.  Her bravery may have in part been influenced by our keenness to push her around in a wheelchair.  I have a feeling she may not be the trusting type.

As always when in such esteemed company, this trip was an education.   I learned that Salvia discolor tastes like purple and that boys’ sense of smell isn’t as good as girls’ to save their sanity. Rather shocking was that Mad Cat is mad about cats and not actually a mad cat.  Disappointingly, that neither Rusty or the Farmer’s Wife can bake cakes.  And most impressively that SDG Skypes with his dog and can actually talk fluent Woof.

There is something about being with like-minded people.  These trips are the antithesis of an AA meeting.  We are addicted but we don’t want the cure, we relish it, and these meetings amplify it. It is joyous.  It is not a competition, it is about sharing.  I know this one, you know that, we learn, we laugh.   Stand up and be proud, we are All Horts!  Thank you everyone for making it a wonderful day.