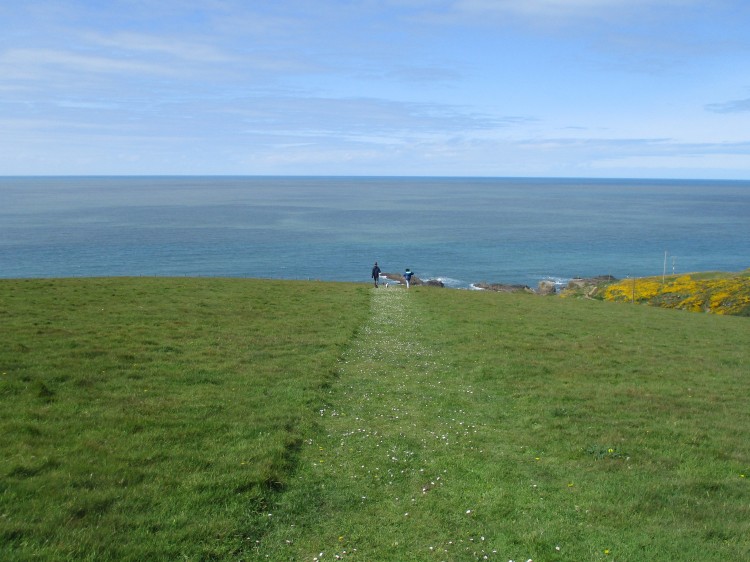 About an hour’s drive from where we live is Hartland Quay.  If you sailed westward from our house, close following the coastline, you would pass Morte Point and Grunta Beach on the way to Woolacombe and Putsborough, then round Baggy Point to Croyde and Saunton, skimming the estuary where Appledore and Insow nestle and the rivers Torridge and Taw find their way to the sea, then onto Westward Ho! and Clovelly, past Barley Bay and the lighthouse, turn the corner and you will have reached your destination.   We forgo the dingy and took the Ford Fiesta.

My dear-dear friend Daisy-Daisy and her wonderful Chain own a caravan on a site close to the village of Stoke, a mile or so above the quay.  Several times a year they venture down from the big city to enjoy the countryside.  Sometimes they bring half the city with them.  Yesterday, however, they were alone.  So we visited.  It is a lovely site, run by considerate folk.  The camping and vans are confined to the edge of the fields, the grass is left long in the centre allowing wildlife and wildchildren to run free amongst the wildflowers.

After greetings and a quick cuppa we headed off on our quest.  We began our journey negotiating a field of nursing sheep, with an unusual preponderance of black triplets, who were intent on resting on the footpath until the combination of human and jack russell caused a bleating retreat. We carefully traversed a vertiginous cliff path, past coconut scented gorse and diverting views, then shuffled down steep rugged steps skirted by sea thrift and kidney vetch, eventually reaching our destination.  The pub.  Here we gossiped, supped and ate chips. Bliss.  Then malted milk ice cream.  Double bliss.  Then the climb back, considerably slower, to coo once more over the lambs, occasionally pausing to look back and smile.

16 thoughts on “Sometimes Look Back”