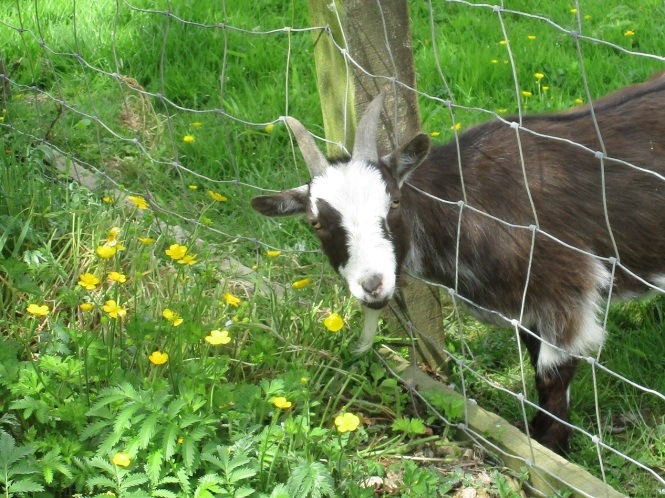 “Mrs G, one of the pygmy goats has got his head stuck through the fence!”

It is not as if the goats’ field is bare, it is lush and green and full of tasty buttercups.  It seems that, in Cocoa’s eyes anyway, these are not quite as delicious as the ones the other side of the fence.  As bad luck would have it Mr G, AKA Farmer Tony, had headed across the border to pick up his new charabanc and was accompanied by Master G.  So it was left to us gals to sort out the problem. The horns were the sticking point.  Once through they didn’t seem to want to go back.  Hinges would have been useful.  We pushed. He pushed back harder, they are surprisingly strong these little ‘uns.  We tried a tentative twist but were rebutted, literally.  All the while he continued an occasional nibble, wouldn’t want to miss such a fine opportunity.  So after a consultation with our non-resident expert, we located wire cutters, chopped through the fencing and released the little blighter.  He skipped off back to his mates without so much of a backward glance.  I meandered back to my planting, wondering where it had all gone wrong.