The day started with a van parked across our driveway.  I should have taken it as a sign.  But I didn’t.

When I win the lottery/premium bonds/marry a Rockefeller the first thing I am going to do is employ a chauffeur.  The thought of never having to worry about driving a car again is a fantasy of mine.  I passed my test late, in my 30’s, and on my third try.  My friends at work edited the congratulations card each time, from “I knew you would do it first attempt” to “Nailed it this time” then “Thank goodness, we are getting bored now”.  They even kept the same celebratory balloons, by the time I received them they were a little wrinkled and deflated.  I knew just how they felt.

I am not a confident driver, but needs must and although a little cautious I don’t think I do too badly.  This morning, half way to The Mantle’s estate I came across a road closed sign and indeed a closed road.   In a mini-panic I called His Lordship, who suggested I took the road to Kentisbury Ford.  I took the road to Kentisbury, surely that was close enough?  It seems not.

The fact that there were no other vehicles on this road should have been given me a clue.  But no, like a lamb to the slaughter off I headed into the abyss.  A few country lanes, child’s play.  Since moving to North Devon I have had plenty of practice.  One skinny road is pretty much the same as another.  And all would have been fine if I was driving a Four x Four rather than a Ford x Focus.   At first it wasn’t too bad.  A drainpipe road, no problem.  A narrow stream of ice running down one side, easily avoidable.  Then at the top of the hill, I screeched to a halt, when I spied this. 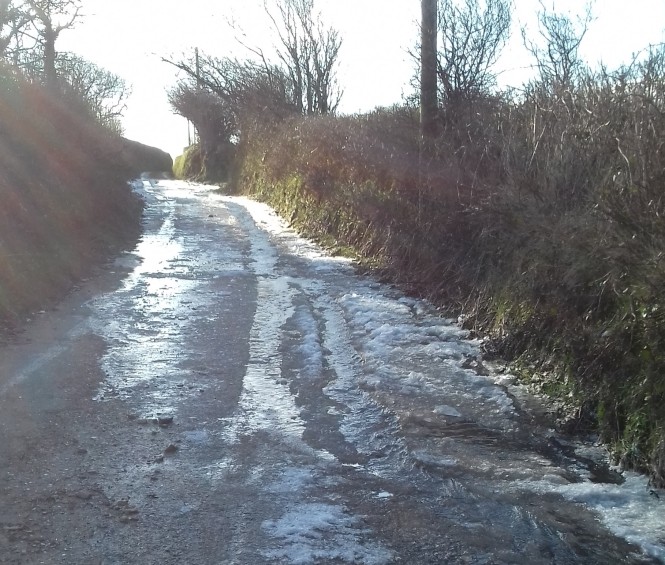 No No Nanette, was my initial reaction.  Then, I need to get out of here fast before a tractor hurtles towards me with some of those spiky things on the front.  A quick reverse into a field (yes the gate was open) and I was heading back down the hill past the frozen stream to the pretty hamlet below.  I pulled over to make another phone call (no signal obviously) and spotted a rather lovely church.   As I am a sucker for a pretty church I thought I would have a quick gander before I headed off to who knows where.  My coat was in the car boot, in my haste I didn’t open it to full extent and the lid came crashing down on my head.  Ouch and double ouch and darn it.

Not a soul in sight, I gathered my addled self together (I didn’t cry but almost) and opened the latched gate into the churchyard on which a sign told me I was being filmed by CCTV.  Well that will give them a laugh, I thought.  This wonderful sundial, dated 1762 reminds us to “Watch and pray Time steals away”.  True, I had better get on.

Back the way I came.  This was without incident except a little more reversing to let a smarty pants in their Land Rover Poser Edition pass.  When I reached the main road I discovered a testosterone fuelled meeting of machines.  Tankers, JCBs and lorries of unspecified use and lots of high viz.  By this point, with aching head, traumatised by curling rink road, I was not in the mood for buffoons gesturing at me impatiently.  I pulled up, turned off the engine and got out of the car.  My temper was quickly diffused by a chirpy chappy from Swansea, who pointed me in the direction of a much better route, ie the way I should have gone in the first place.  Perversely this way had two lanes, no ice and other drivers.

When I eventually arrived at The Mantles, a hot coffee was thrust into my hand, sympathetic noises were made, poorly head rubbed gently and all was well again.  Brambles were thwarted, nettles extracted, ivy destroyed.

And the way home.  Not a problem.

It’s easy when you know how.

20 thoughts on “Diversions and Poor Decisions”