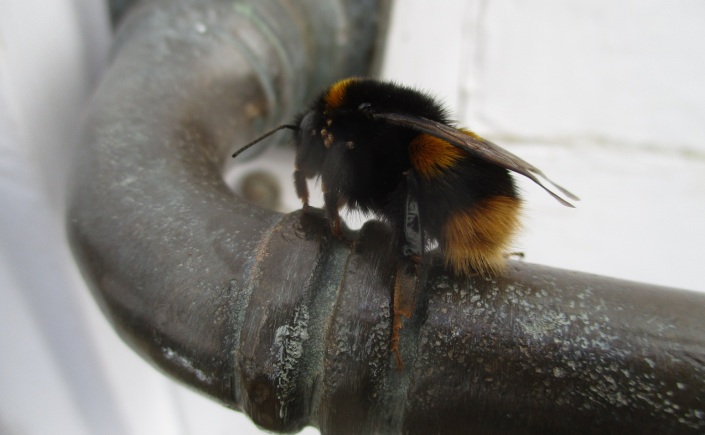 I am no bumble bee expert.  In fact I am no expert at all.  If I had to pick a specialist subject it would possibly be cheese scones (consumption of), but even then I wouldn’t bet on me to pick up the trophy.  When I examined this photo closely, a bumble resting on the handle of Max’s conservatory door, I was concerned to see some mites clustered around the front of her body.  There has been much publicity about Varroa mites who have spread disease and devastation amongst the honey bee population.  It seemed likely that a positive story about the first bumble of the year was just about to turn into a tale of horror and pestilence.  A quick Google later and my mind was put at ease.  Most of the mites found on bumbles are harmless, in fact they are just hitchhiking to the bee’s nest where they feed on such delicacies as general detritus and even smaller insects.  A cosy symbiotic relationship.  Apparently this arrangement only becomes a problem when there are so many passengers the plane can’t take off.  Hopefully that doesn’t happen too often.

All things considered, it was happy ending after all.  Another school day.