Today, Saturday 24 March 2018, I am on a secret mission with several other SoS-ers.  It is thanks to the magic of time travel and WordPress scheduling I am able to bring you my contribution this week.  Take a look at our leader The Propmeister‘s blog and all will be revealed about what Six on Saturday is all about.  When you find out will you please let me know.  I must get on, I have to polish my boots.

My first photo is entitled “How the Mighty Have Fallen”.  Now I regret my cursing and chopping back of this exuberant Euryops chrysanthemoides  wishing it was a little less vigourous.  I also rue my cockiness about its safety.  As the Beast from the East seems to be a pack of wolves rather than a lone traveller, with another attack due next weekend, I am feeling rather nervous about its fate.

A parcel arriving is always an exciting thing.  When it comes from de Jager and has bulbs inside it, even more so.  Rest assured, no lessons about growing tender plants have been learnt.

A stop off on the way home from Cardiff as couple of weeks ago resulted in a few purchases.  Some went to a client, some came home with me.  This Fritillaria uva vulpis, Fox’s Grape Fritillary, was one that has now joined the happy throng at my house.  Or perhaps the cold and slightly miserable throng.  Looks jolly enough though. 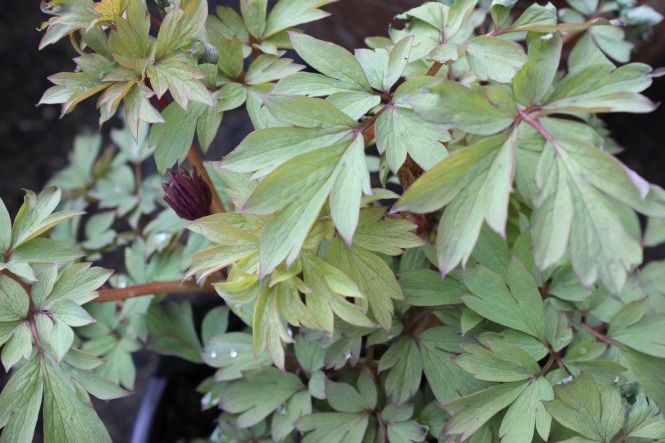 Another purchase on the same expedition (it is illegal to buy just one plant and equally unlawful not to have a bleeding heart in your garden) was Lamprocapnos spectabilis ‘Valentine’.  Although unplanted as yet, it is looking surprisingly chipper, even after languishing under several inches of snow for a few days. 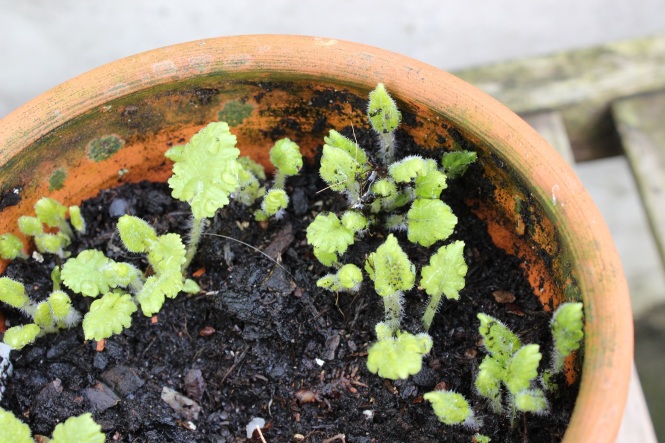 In all the slush and rotting vegetation we have more positivity in the emerging furry shoots of  Primula sieboldii  ‘Essie’.  This was purchased from Penny’s Primulas as couple of years ago, whose spectacular cultivars are named after their beloved cats.  You will have to wait and see what this moggy looks like.  Liking the dramatic build up?

Lastly we have a little chap who was basking in the sunshine this morning.  He must have hunkered down in the Osteo that Refuses to Die with his new caterpillar best friend, now known as H R Puffin Stuff thanks to Tony.  Seems like he has a leg in the wrong place, who knows what was going on underneath that horticultural fleece.  Perhaps it is an optical illusion.

That’s all folks!  Thanks again to The Propagator for hosting this meme.   I am loving this time travel lark.  Have they appointed a new Doctor yet? I’ve got a brilliant idea, they could have a woman as the next Doctor and it could be me.  What do you think?  Sorry, what was that?  I’ve missed the boat?  It was worth a crack.