As we have been spared, well I have anyway, Six on Saturday will go ahead as planned.  Please do us all a favour and take a look at the The Prop’s site, he gets in a terrible sulk if you don’t.   And a Propogator sulk is a magnificently terrifying event.

We begin with Salvia patens ‘Blue Angel’.  It is not a secret that I am salvia fiend.  I am also partial to blue flowers.  Cuddly is good too.  Tick, tick, tick and voilà, my idea of heaven.

After yesterday’s crazy squalls and anticipating tomorrow’s predicted storm, today was an eye in the storm of the traditional bank holiday weather.  Unfortunately this window of opportunity did not coincide with a peak in my enthusiasm, rather a surfeit of ennui.  My heels scraped the ground as I dragged outside and did a few bits of potting on and took some late cuttings.  I also planted these, bought last weekend at Rosemoor Garden Show.  They are the corms of Crocus sativus , otherwise known as the saffron crocus.  Apparently it takes between 50,000 and 75,000 plants to produce a pound of this golden spice.  I have thirteen.  Start small, think big.

This Nicotiana alata ‘Lime Green’ has proved to be a little belter.  It over wintered (yes, THAT winter) and has gone on to flower through drought and deluge.  Big round of applause please.  It is supposed to be a half-hardy annual.  Someone is confused but I am not complaining.  It would be asking too much to expect it to keep going for another year, so I will try to collect some seed just in case.

This was sold to me as Solanum rantonnetii, but apparently it is now known as Lycianthes rantonnetii or the Paraguayan Nightshade.  Top Tip: don’t eat it.  But then I doubt whether you were thinking about it anyway, not with the word “nightshade” in its common name.  A bit of a monster, growing to 2m x 2m, it is at the moment just getting into its stride.

Now the fruit of Rhodotypos scandens, common name black jet bead.  It was taking a real battering yesterday, being bent almost double in the thrashing wind and rain.  This morning, it is none the worse for a good shake, rattle and roll. 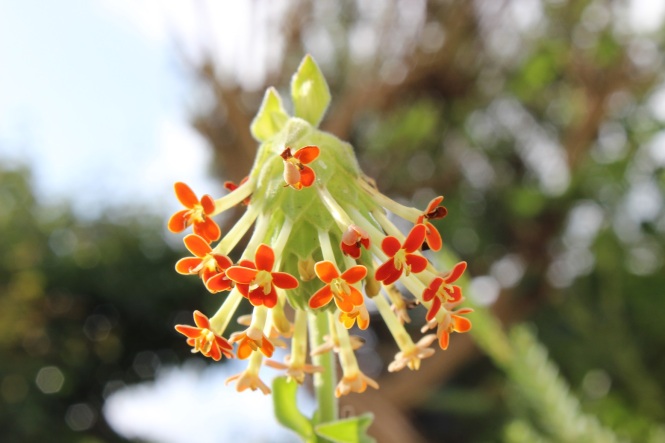 Lastly we have another of my new purchases, the wonderfully monikered South African Glumicalyx nutans.   This plant was bought purely on name and bizarreness value.  You can imagine how thrilled I was to learn that it is commonly known as the nodding chocolate flower.   And yes apparently it does have chocolate scent.  We were meant to be.

All done.  That is your lot.  Thanks Your Royal Propness for hosting another week of SoS.  Na Noo Na Noo.

23 thoughts on “Six on Saturday – Eye of the Storm”