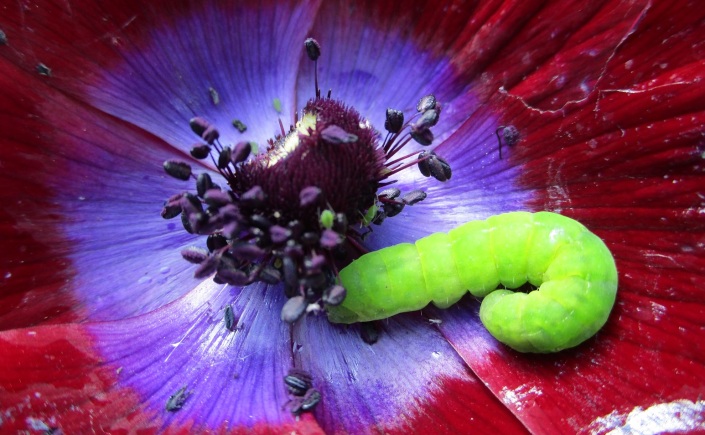 Happy Six on Saturday Easter!  Or should that be Happy Easter Six on Saturday?  Whichever, I hope your Easter is a good one, whether or not you partake in this weekly rite.  Not sure what I am on about?  Nothing new there then.  It may all become a little clearer if you visit The Easter Bunny of Propdom’s site.  He will explain, and while you are there you can find out what all the other bunnies have been up to.

Shall we begin with a fat green caterpillar looking splendid in the magnificent blue bowl of Anemone coronaria ‘Bordeaux’, featured previously.   If we don’t allow caterpillars then there will be no butterflies or moths.  As I have discovered this week, the human species inflict more damage on my plants and aren’t half as pretty.   It is good to share sometimes.

Next we have the Cappadocian navelwort, Omphalodes cappadocica.  Such a pretty plant, a blue of the angels.  I half-inched this piece from Lady Mantle’s estate when she otherwise engaged (on her gin break).  As I was already nailed for the theft of one plant I thought I might as well go for broke and take another.  Although the wanted poster is rather fetching likeness, I consider 30 bob and half a corned beef sandwich a rather insulting reward for my apprehension.

On to Dodecatheon meadia, the shooting star.  It is just coming into bloom and each year charms me with its downward pointing dart-like flowers.   At the moment it is growing in a pot, which is not ideal but means I can bring it in and out of the spotlight as warranted.  Now it is in prime place, as it deserves. 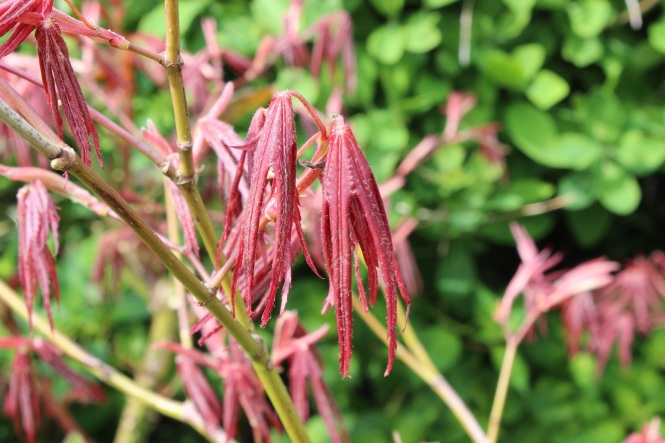 Next another emerging Woolies acer.  In the last few weeks I have been systematically ….. hang on a minute who I am trying to kid, that is absolutely nonsense, I have never been systematic in my entire life……. I have been randomly potting up and on, renewing compost and feeding all the permanent pot residents.   They thank me for this spring clean and renourishment.

Finally my cunning tulip plan of the autumn, to pack Tulipa ‘Orange Emperor’ and Tulipa ‘Purple Prince’ into the Belfast sink, has finally come to fruition.  Admittedly there are more earth shattering innovations, but on a cold November weekend it seemed pretty avant garde.   The crowd were on the edge of their seat for a while when the purples flowered and the oranges were a no-show, but eventually everyone caught up and it is now looking splendid.  A happy ending.  Just as it should be.

24 thoughts on “Six on Saturday – Bunnies”