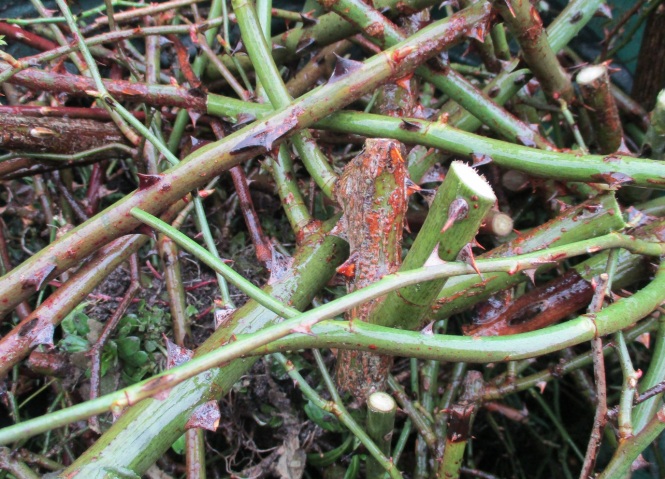 Today I have been pruning roses, climbing roses no less.  Actually it started as rose pruning and descended into rose annihilation.  The shrubs in question were growing (notice I say “were”) on the edge of a parking area in a strip (I am loathe to use the exaggeration “border”) approximately 15cm wide on top of a stone wall.  They were supported, in their valiant attempt at growth in these less than ideal conditions, by a tatty piece of trellis.  This trellis is to be replaced.  “Do you really want to keep these roses?” I asked Lady Mantle, AKA The Queen of Hearts.  “Not on your Nelly” she replied “Off with their heads!”  So rather than the measured and tender reshape planned, it became a massacre.

Today roses have been clinging to me, snagging themselves onto any vulnerable spot.  Long spiny arms spun round and clawed me at like demented krakens.  My nose bled, my legs were punctured and hands gnawed at, and yes I was wearing clothes at the time.  On one rather embarrassing occasion I had to ask his Lordship to remove a particularly persistent one that had attached itself to my posterior.  He may have sniggered.

Revenge, that is was they were wreaking, sweet revenge.  And I don’t really blame them.