Hip hip hooray, it’s another Saturday!  I’ve had a haircut and a bowl of chips with mayonnaise and now I am ready for anything.  Even a Six on Saturday.  No idea what I am talking about?  Where have you been?  Lost in the Bornean jungle, or Ikea’s soft furnishing department? Don’t worry, Sir Propalot will update you on proceedings.

First we have a splendid rose.  It was in the garden when we moved here, so I have a valid reason for not knowing which one it is.  I suppose I could do a little research, but to be honest I’m not that bothered.  All I know is that it is beautiful and fragrant.  Which is adequate.

Next we have Parahebe ‘Snow Cloud’ which has weathered the hard winter admirably. The other parahebe in the garden, although alive, has not fared so well.  It is looking decidedly ropey and is on the “pull yourself together or you are out” list.  Swotty Snow Cloud is definitely not on that list.  Straight to the top of the class you go! 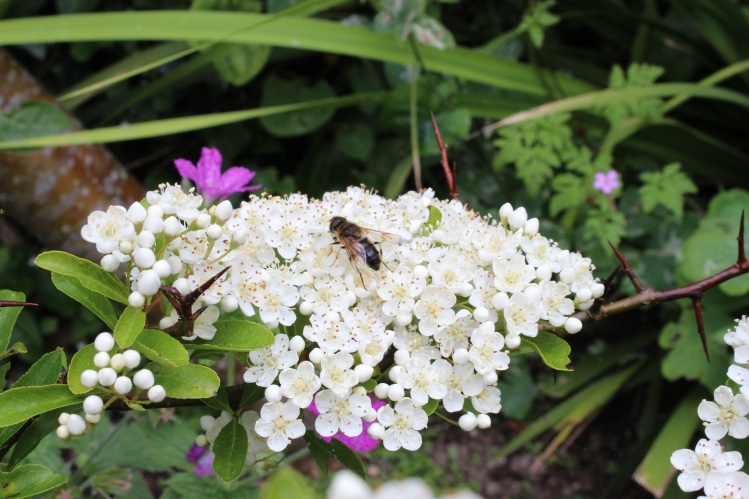 Spikey plants are not encouraged in the gardens that I work in, let alone in my own.  OH bought this pyracantha, even though when he suggested it I said through gritted teeth “if you want it, feel free”.   I concede that it is great for the wildlife and the flowers are rather lovely.  This does not detract from the fact it is a vicious monster to the gardener. 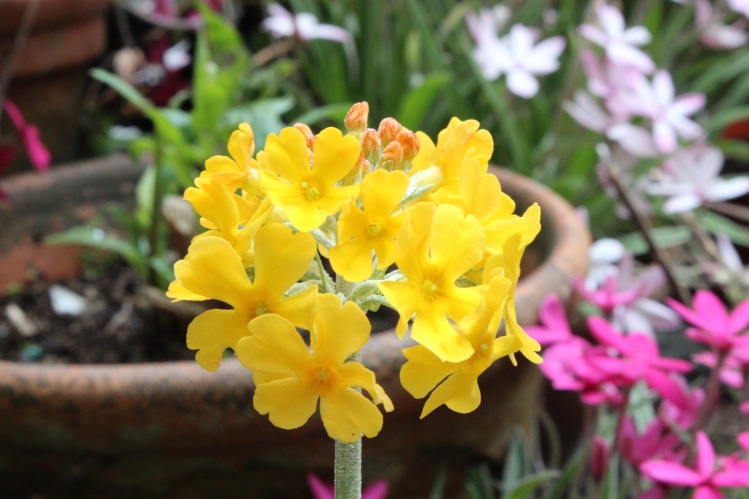 A little late to the spring party, but none the less very welcome, this primula is strutting its stuff this weekend.

Earlier this week I said to Ms Button, whilst attacking the forest of mint that someone decided was a good idea to plant directly into the ground, “Do you ever wish you had a time machine and you could go back to the moment the offending plant was being planted and say “stop, in the name of humanity, do not put that thug in what is to become my garden!””  I would say just that to whoever planted this pink geranium in my garden.  It is a thug and pops up in, under and over everything.  I believe it to be Geranium nodosum.  Ruthless.

Last, but definitely not least, we have Rosa ‘Rhapsody in Blue’.   Not blue, but a rhapsody indeed.  Fragrant and floriferous.  Wonderful.

That is your lot, another week passes, another six to savour.  Some demons, some angels, some demonic angels, some …. you know where I’m going.  Thanks to The Prop, onwards and upwards!

22 thoughts on “Six on Saturday – Angels and Demons”