My week panned out as follows: wet, dry, wet, slightly soggy, sunny.  It could have been worse.  I might have had a leak in both my boots and my waterproof trousers.   Luckily it was only one of the two.  Gardening has been done, but unfortunately none in my own garden.  Which possibly will not come as a surprise.  Still, it soldiers on.   And we have arrived, as is inevitable as all roads lead here, to Six on Saturday.   Undoubtedly other Six on Saturdayers are more in control of their own destiny.  To confirm this fact, The Propping Maestro’s site will reveal what a zillion other participants (fair and true without exception) have been up to.

Shall we begin with a humble beauty?  Humble is far from a bad thing.  We would benefit from much more.  I describe it as such as it is neither a rare exotic or challenging to grow.  It is a cosmos.  I was expecting another Seashell Mix but someone else turned up.  I don’t care.  I love it.

Next are a couple of canoodling New Guinea Impatiens.  These are favourites of mine, and although the flowers are prone to disfigurement, they make fine summer bedding for tricky places. 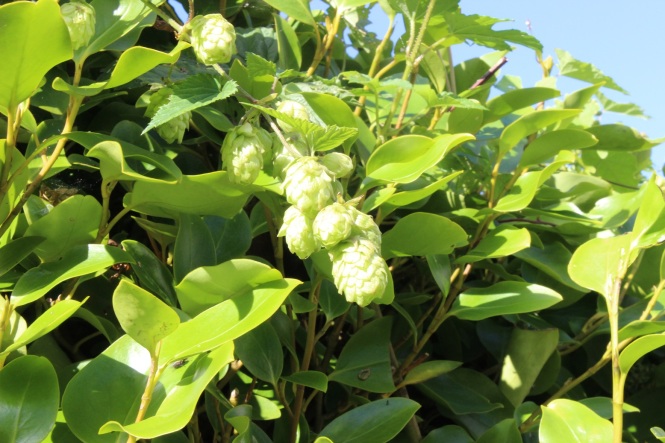 We have been battling a mystery climber, ensconced long before our arrival.  Its wicked tendrils swamping and strangling in a manner not conducive to friendly play.  Today, it revealed its true self.  Hops.  Strangely, I am now warming to it. 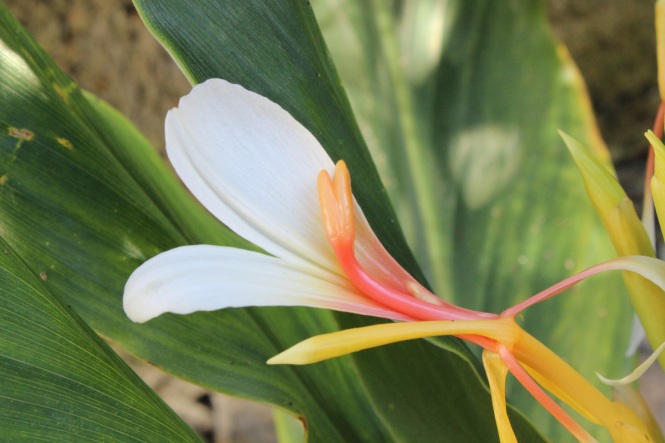 Now a single flower from the spike of Hedychium ‘Pradhanii’.  I will tell you it is an artistic shot.  The truth is the spike is rather haphazard and unimpressive.  This is its most photogenic side.  A diva must be placated.

Now Tithonia rotundiflora ‘Torch’ that has managed to push through the mob to show its lovely head.  Thank goodness for that.  I had wondered what had become of it.  Only in a slightly detached way, I never sent out a search party.

Finally Alyogyne huegelli.  Anyone got a clue how to say that?  Not me.  Grown from seed this year, it is rather lovely.

’til next time, my friends!

Gardening near the sea, helped along by two old Yorkies.