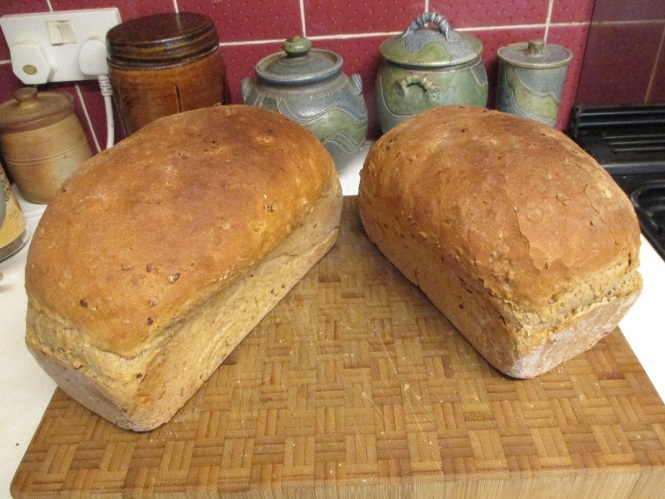 Today is a day of reflection.  A day of much sadness.  Like many, I feel impotent, bewildered, unnerved, despairing, a little scared.  Mostly sad though.

So I thought I would make bread.  I haven’t baked for a long time, it fell out of favour in my world for some unknown reason.  Probably laziness.  Co-incidentally, on a whim, I had bought some fresh yeast and bread flour yesterday, with noble intentions.  In case anyone else would like to give it a go, here is my recipe:

First weigh out your ingredients.  Then realise that when OH had said “the scales aren’t working” and you thought he had just been pushing the wrong buttons and dismissed it with a wave of the hand, was in fact because the battery had worn out.  Sigh.  Look for new battery, in the new battery drawer.  Find loads of junk but no appropriate battery.  Give up looking.

Next consider asking your lovely neighbours if you can borrow theirs.  Reconsider as they are probably not up yet.  Decide to go free-style.

Look for recipe, decide you quite like the sound of Nigel Slater’s but will morph it with Paul Hollywood adaptation for wholemeal flour and take influence from the one on the back of the flour packet.

Put all of the flour in a bowl because it is a 1kg bag and you can just double up the recipe in the book, add 60g of fresh yeast (estimated as you had bought 100g) and 1 1/2 teaspoons of salt (placed at opposite side to the yeast as they don’t make good allies).   Make a small effort to rub the yeast in and around the flour.

Realise that you need softened butter and wonder at what point hard butter (which is what you have got) becomes softened butter before it becomes melted butter.  Decide you don’t care and melt it anyway – about 60g again (remember no scales).  Pour into flour and mix around a bit.

Measure out 640ml of luke warm water (-ish the measuring jug lines are a bit faint).  Put new measuring jug on shopping list.  Start to pour water into flour combo and panic before it all goes in as it looks distinctly like a very runny ectoplasm.  Mix about with your spurtle (porridge stirrer from Edinburgh) realise there is no option but to get your hands in there and sort it out.

Set your iPod on shuffle, plug in and go for it.  Tip out gunge onto floured worktop, white flour because I used all the wholegrain seeded stuff in the mix and didn’t save any for later.  Wait for the phone to ring.  Panic again as it seems to be very wet, add a few sprinkles of flour and keep kneading for about 10 minutes or until something you have been meaning to remove comes on the iPod and is so irritating you have to stop.

Form into a ball of sorts and put into a mixing bowl, cover with tea towel.  Look around the kitchen and scream.  Try to tidy up a little before OH comes home.  Look in mirror and scream.  Put the kettle on.

Watch some Hercules on the TV and have a cup of tea.  Return to the kitchen to check on developments, throw hands in air in horror as an enormous whoopee cushion is emerging out of the bowl.  Tip out onto work surface as before and start to knead again, open front door to OH who has been shopping.  Quickly oil and flour tins (one large, one smaller because that is what I have), divide up dough into tins vaguely taking into account different sizes. Cover with tea towel and unpack shopping.

Watch some Hercules on the TV and have a cup of coffee.  Put oven on to gas mark 8 and after a cursory heat up put bread on top shelf of the oven.  Read recipe which says slash top before you put it in the oven.  Decide this is a rubbish idea.

Watch some Hercules on the TV and eat a bag of cheese and onion crisps.  Check oven after 30 mins and swoon over their bronzed beauty.  Remove from tins, with either a quick tap or curse and dig about with a knife like a frenzied harpy, dependent on what kind of day you are having. Perform a ceremonial walk around the living room carrying your creations aloft singing “behold the glorious bread”.

Wait for them to cool for approximately 30 seconds.  As a grown up I take full responsibility for my own tummy aches.

28 thoughts on “Our Daily Bread”