Welcome to another Six on Saturday, the meme of choice for the horticultural in-crowd.  Too cool for school, on-trend, leaders not followers.  You get my gist.  Contributors are herded by none other than the great cultural icon himself, The Propagator.

Before I go any further I have an apology to make, last week, in my haste, I forgot to mention the indomitable Mr K.  As today is his birthday, I will do my best to redress this error. Oh, and I will say, sorry, it won’t happen again.  Let us get a move on, or it will be Sunday before we know it!

Firstly we have a tulip and hosta combo.  After a slow start to the season things are beginning to catch up with themselves, meaning there are some interesting combinations to be seen.  The spring flowers are overlapping with early summer ones.  Strangers are making new friends.  These tulips have been in prime condition for a couple of weeks now.  They are in a rather shady and exposed spot.  Perhaps that is the trick!

Last year the aquilegias took over the garden and I vowed to ensure that this did not happen again.  It has.  When they have finished flowering and before they seed I will be ruthless.  I promise.

Next is Cerastium tomentosum, also known as dusty miller and snow in summer.  It lives on the wall between our house and our neighbours’.  On a regular basis it is squashed beneath sleeping cats, slices of apple pie, bowls of soup, cupcakes, magazines, plants and elbows.  Doesn’t turn a hair. 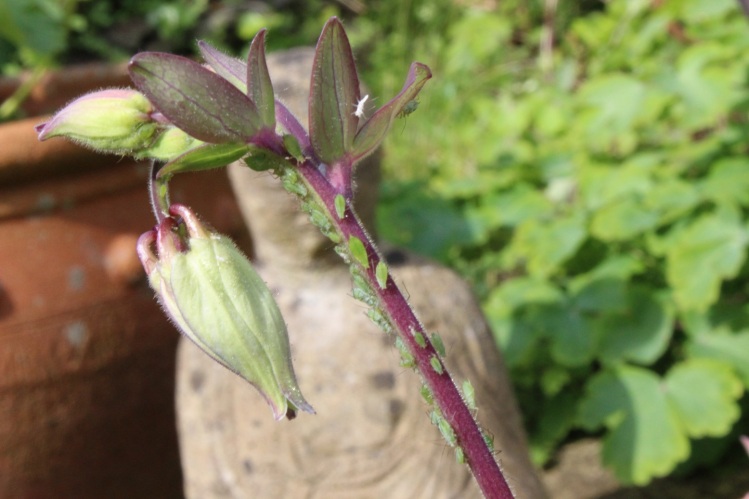 They have arrived, in fact they have been here for a couple of weeks, so much for a hard winter killing of pests!  In fact both the aphid and mollusc populations seem to be doing rather nicely, thank you very much.  Not sure what the white one is all about, perhaps it is the ghost of previously squished greenfly and it has come back to teach me a lesson. Gulp! 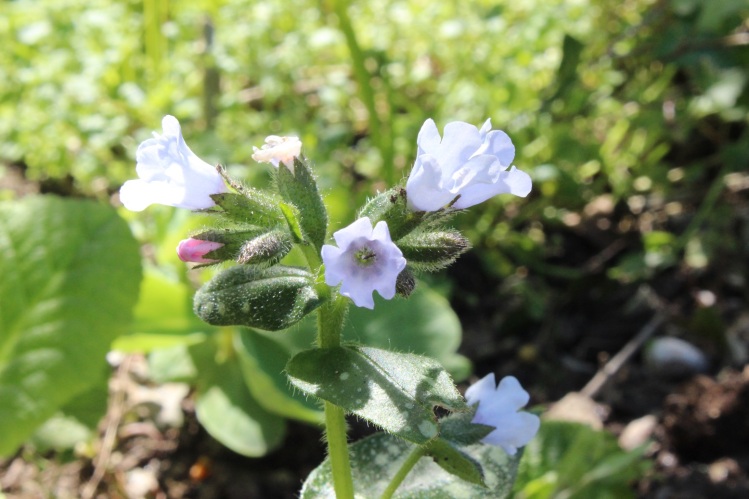 Another late on parade is Pulmonaria ‘Opal’, a plant that I rescued from a bargain bin somewhere earlier in the year.  I have grown this lungwort before and pounced on the pathetic specimen as soon as I realised what it was.  The colour is enchanting, everything I remembered it to be.

Lastly we have Geranium sylvaticum ‘Mayflower’.  I am big fan of geraniums, they are dependable and long flowering and come in many makes and models.  This wood cranesbill is a great beauty, understated and elegant.  Just like The Birthday Boy!

Thank you Mr Prop, why don’t you pop on over to his blog and find out what the rest of us hipsters have been up to.  Adieu.

23 thoughts on “Six on Saturday – Celebration”